The need to build up, not out.

Looking out from the street, sidewalks stretch far into the distance. Neatly manicured lawns, with almost carpet-like grass, line the street. Set back behind the tiny plot of lawn is the typical suburban home.  Identical houses sit side-by-side one another in rows upon rows, creating a sprawling network of families with their own boxy house. Reverse the seen a couple of years back and the rows of houses begin to disappear and the land returns back to trees and its natural ecosystem.

Rural to urban, then urban to suburban population shifts have been going on in regions of the US since the early 1900’s. Land once covered with forest is bulldozed, concrete is laid and rows of cookie-cutter house are put up. This trend of residential development is happening all over the country, the world even. It starts with individuals that move to cities when they are younger, typically for employment opportunities. Then these individuals start families, want more space and a respite from the hum city life, though need to remain close to the city for work, so they buy a suburban home-cue the creation of the commute! The natural thing was to develop the surrounding areas of the city into sprawling metropolitan areas. The American Dream has ingrained the idea of moving to a neighborhood, having a nuclear family, getting a car for the commute, and celebrating the space and freedom of the suburban environment.

“Some of the best agricultural land is often lost to rapidly expanding urban sprawl. The loss of farmland on the outskirts of a city makes the city more reliant on food sources that must be transported from farther away, which uses more energy.” (CurioCity, Impact of Urban Sprawl on the Environment) 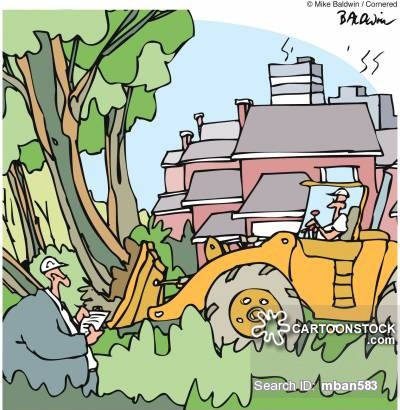 This sprawl has caused widespread ecosystem disruption and natural animal habitat destruction. Removal of the natural environment unleashes a litany of consequences such as amplification of climate change, air pollution, water pollution, flooding, as well as water shortages.

When the green canopy is taken down and black asphalt is put down that absorb greater amounts of heat, and unlike plants, does not absorb carbon and emit oxygen, climate change is accelerated. Surban families have some of the largest carbon footprints. “In many big metropolitan areas like New York or Los Angeles, research found, a family that lives in the urban core has about a 50% smaller carbon footprint than a similar-sized family in a distant suburb,” says an LA Times article. They heat and cool homes that are unnecessarily big, they have gas-guzzling cars and usually commute long distances. Water issues have become prevalent in suburban communities, as well. These sprawling neighborhoods have water pipes and sewer systems that stretch as far as they do. Carpet-like lawns with non-native Saint Augustine grass require frequent fertilization and watering. This causes a strain on water resources and water pollution from runoff. When you cover the ground with concrete flooding becomes a significant issue. In areas where trees and plants would normally hold the soil together soaking up water, now covered with concrete, have frequent flooding.

Houston, an area which was just inundated with unprecedented flooding from hurricane Harvey was a victim of the consequences of reckless land development. Recent evidence has revealed that the flooding was worsened by the fact that certain basins in the south Texas area were recently developed and covered up with concrete infrastructure. According to Texas A&M research, “between 1992 and 2010 alone nearly 25,000 acres of natural wetland infrastructure was wiped out…Altogether, the region lost the ability to handle nearly four billion gallons of stormwater.” This reckless land development is occurring in many flood-prone areas of the US.

If we keep allowing land to be turned in to an unending suburbia, there will be no natural ecosystems left. Continuing to spread out and cover up natural environments with pavements is unsustainable and foolish. We need to learn to live in unison with natural environments. It is a highly wasteful and inefficient way to house people. Communities need to be planned and created in ways that maximize efficiency and minimize environmental impact. In other words, communities need to integrate the natural ecosystem, not remove it.

Local municipalities should invest in making larger condo-like buildings with spacious levels for families, designed intricately to make it comfortable and replicate the space and freedom of suburban homes. So, rather than building a neighborhood for 50 houses, create a tall structure that is designed in an environmentally friendly manner and can hold the same amount of people. A fraction of the land is used, comparatively, for a much taller building and the rest of the land can be used as a community garden and eco-preserve. Instead of building out, we must build up!

Clearly, the photo shows fictional buildings, though, it would not be unrealistic to expect communities like this, ones integrated with surrounding nature, in the future.